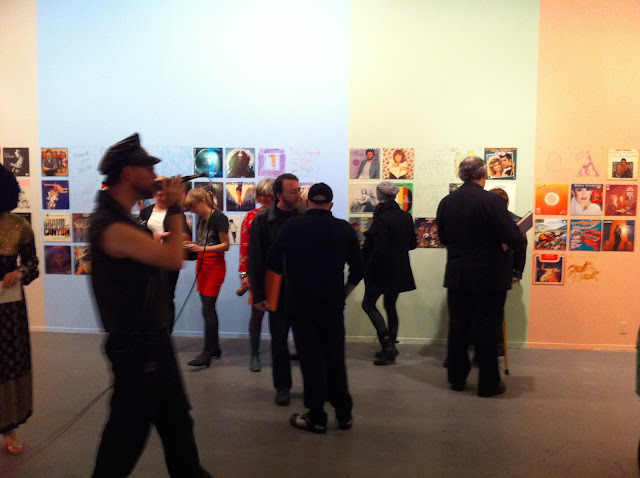 The records we listen to tend to reflect the type of people we are. You could call it a aural mirror of sorts. Let's be honest here, we're all narcissists at heart and we love our records because we can associate with them. They make us remember things about ourselves that no one else can. They're our sonic double.

When I make the trip to the next world, I know I definitely don’t want my hard-earned vinyl’s going to a bin in the Salvation Army. So what do you do when you’ve got a deceased loved-one’s record collection to disperse? Throw a party!

This was one of the problems Cathy Busby faced when her brother Steve, died in December 1993 from an AIDS related illness. He was born in 1953 and was only 40 when he passed away. The event consisted of 200 of Steve’s vinyl’s showcased on an 8-colour paneled wall. It was set up in such a way that you would buy a ticket and be entered into a draw. When your number was called, you would choose one of Steve’s disks and after you took it down from the wall, you would draw your own rendition of the cover in its place. The event coincided with World AIDS week and all proceeds were donated to the AIDS coalition of Nova Scotia and the Khyber Centre for the Arts. Busby was hoping to raise $500 for each cause respectively.

The casual warm environment afforded me the opportunity to meet Steve’s sister and the organizer of the event - Cathy Busby. When I asked her about Steve, she described him as, “someone who really loved life”. I asked Cathy why she decided to hold the event and she called it a metaphorical spreading of the ashes. She wanted to make sure that Steve’s vinyls were going to people that would appreciate them, and she also wanted to have an event that would honour the memory of her brother. She said, “It’s nothing if people don’t come and choose a record.” From looking at the number of people who showed up, I’d say she was certainly successful. After the initial excitement and nail-biting over who was going to get what subsided, everyone began to loosen up. I won't scar you with pictures of my renditions of their covers, but I was very happy with my two finds - Bob Marley's Natty Dread and a French pressing of a Boogie Woogie record (which I'll post shortly). With great music being spun all night by DJ Al Barbour, an open bar and a tasty local selection of hors d'oeuvres, it wasn’t long before people were 'dancing the night away' to Steve’s vinyl.

This blog is dedicated to the preservation, evolution and exposure of Funk, Soul and Jazz music in today's technologically forward and culturally plural world.
1.8 seconds is the time it takes any point on a record to rotate 360 degrees when played at 331/3 rpm.
If you have any issues with material posted on this blog please e-mail me and I'll remove it.
Don't forget to go out and buy the records from your local independent record store and please feel free to share your thoughts, it's always nice to hear feedback.

Sam Sky
My days are filled with sound.